Salyer Funeral Home, a third generation business, was founded by my Grandfather, William Blaine Salyer, better known as Bill. As a young man, he worked as an assistant and then managed a funeral home near his hometown in the southwest part of Virginia. He went on to attend Cincinnati College of Embalming in 1939. During World War II, he took his skills to the Army where he served for five years as a part of the war effort. After his time in the armed services, he finished his degree with honors in Mortuary Science from Echels College.

It was during his time in the Army that he met his future wife and partner, Leone Skidmore of Townsend, VA. They were married and added a new member to the family, a daughter named Constance “Connie” Salyer. The family moved to Chincoteague Island and soon after started Salyer Funeral Home in 1949, a true family business. Bill and Leone believed their role was to provide a comforting service to families. They took great pride in their roles as funeral directors. They helped provide a dignified passage into rest for the deceased and provided love and compassion for their families. That same tradition contiues today.

After serving the needs of the Eastern Shore community for many years, Bill became ill. After a valiant struggle, he passed away in 1983. Although Connie was always part of the family business it wasn’t until after her father’s passing that she contiued her education at Catonsville College of Mortuary Science, in Baltimore MD. She left her four young daughters to the care of her Mother Leone, to follow in the footsteps of her father. She and Leone went on to run a successful business. They continued to uphold the same reverence and thoughtfulness for the families of those that had passed.

In 1997, I, Amanda Betts, Connie's youngest daughter, received my Degree form Catonsville College of Mortuary Science. I became the third generation to be part of Salyer Funeral Home. My Grandmother passed away in 2008 at the age of 89. She was a driving force for us and is surely missed. My Mother and I strive everyday to keep my Grandparent’s legacy alive. It is our goal to carry on the tradition of compassion, dignity, and reverence to our families on the Eastern Shore and the Chincoteague Island community. 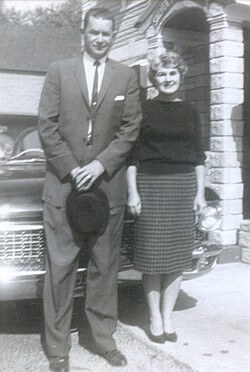